Paintings in wool and how it started

One morning in September (2012), as I was bumping along the Salmonsdam Road traveling from the farm to Hermanus I saw a sheep skin lying in the dirt of the road. I passed it by and then thought twice and reversed back. It was a newly treated sheep hide and it must have fallen off the back of a bakkie transporting sheep skins from Paardeberg Farm. It was a bit dirty and bloody and had a rough coating of salt on the raw side. I tossed it into the back of the bakkie thinking I would work out how to clean it up and it might make a nice rug. It lay outside on the grass for about six months and when finally it was treated with an oxalic acid mix, it was in pretty bad condition. We washed it out in the bath with Omo washing powder and then it was hung in a shed and forgotten about.

When I visited my close friend Sue in the North Western Scottish Highlands in July this year, it being the Scottish summer which was as freezing as our winter, she lent me a scarf she had made in deep blacks and turquoise greens. I was completely transfixed. She said it was ’felted’ and began to tell me all about this technique of agitating sheep’s fleece, ‘locking’ the fibers together, making a ‘skin’ of wool. It was impossible to imagine how raw fleece straight off the ‘sheep’s back’ could be transformed into something resembling this wonderful scarf. Sue set about clambering up a ladder into the attic where she unearthed a huge sack filled with long tresses or skeins of carded wool in multiple brilliant colours. We sat on her warm living room floor and began to play with all these incredible silky Merino fibres, and it felt as if Rumpelstiltskin or Sleeping Beauty had been conjured up in a fairy tale of wool. Sue demonstrated the basic techniques of what is known as ‘wet wool felting'. I made two experimental landscape pictures of images in blues and yellows of Overberg landscapes and began to see the endless possibilities of, not making scarves, but of ‘painting’ in wool. Most of my oil and acrylic paintings of subjects such as Still Lives and Landscapes are bright and full bodied in colour and gesture, being in the vein of Post Impressionist and Fauvist painting. My natural inclination is towards painting as an ‘expressive’ medium; bright colour, bold composition and painterly brushstrokes.

When I returned to the Western Cape I discovered Merino wool was nowhere to be found locally, for sale that is. Here I was on a farm surrounded by sheep farmers, but lo and behold, no wool to be found anywhere! In fact we live in a country that supplies the rest of the world including England with wool, but there is not a single commercial supplier of carded wool, never mind fleece, that I have been able to find on home turf. Desperate to begin with my new medium I ordered carded wool from Britain and of course had to pay import duty on it. How typical I thought, South Africa produces the raw product (raw fleece), exports it and then we have re-import it in a refined form (dyed and carded) and pay import tax on top of postage to get it back. Now, I thought where is that bedraggled rumpled sheepskin I picked up off the road? I retrieved it out of the shed, shedding much of its fleece from exposure to rats and the elements. I combed out the fleece which parted easily from the skin, washed it again and after importing hand carders, again from England, carded the wool and dyed it with natural plant dyes.

In two months eight wool paintings have been created, and half of my hand carded and imported wool supply is depleted. I am excitedly awaiting my first three fleeces from a friend and neighbour farmer who will be shearing his sheep at the end of October. I have found if one makes arrangements with certain local farmers’ wool can be found! The same friend has deterred me from getting my own flock, rightly so, given the trouble sheep are as escape artists! The sheep we have here are not Merino’s, but a Dorset Horn/Merino cross called Dormer, bred to retain Merino wool quality, have good body weight, lamb easily and withstand the Western Cape's cold, wet winters.

My fifth great grand father, William Murgatroyd (1730-1804) of ‘Roebucks’, Warley in Yorkshire made his fortune being a worsted wool manufacturer and I have a sense this wool ‘thing’ may be in my genes.

It goes even further back to my 31st great grandmother, Bertha Queen Consort of Burgundy of Swabia (Birth 907 in Swabia, Germany,Death aft 2 Jan. 966 in Lot-et-Garonne, Aquitaine, France) who legend has it...was sometimes called the "Spinning Queen" .... Queen Bertha went out from her castle one day into the countryside, riding on her palfrey and spindling as she went as was her wont. She even had a saddle built with a hole in it for seating her distaff so she would not lose spinning time during her rides.In the course of her ride she and her retinue came upon a young shepherdess who was spinning as she tended her sheep.Queen Bertha was so impressed with the young shepherdess' industry that she approached the girl and gave her great riches as a reward for her virtue. 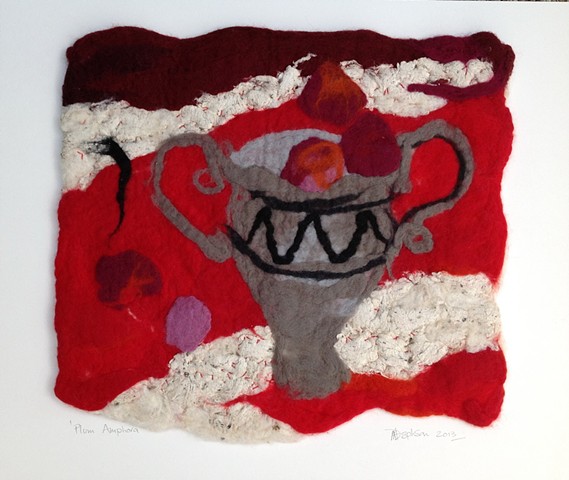 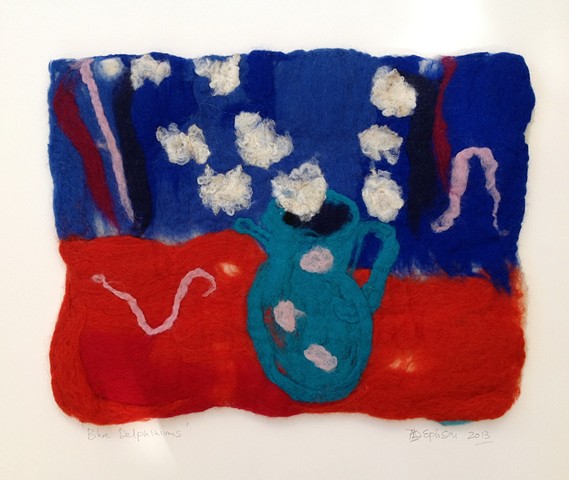 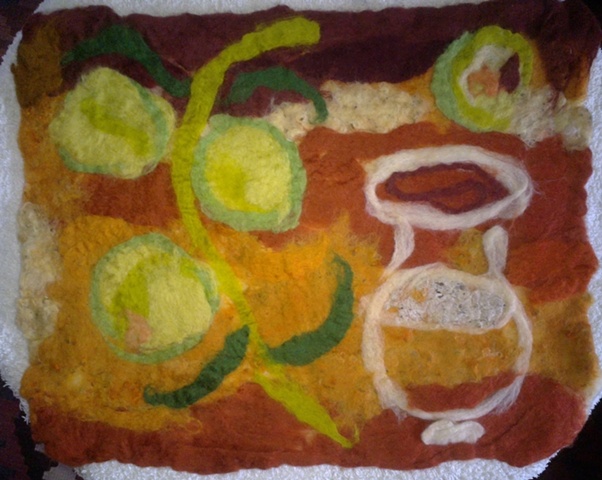 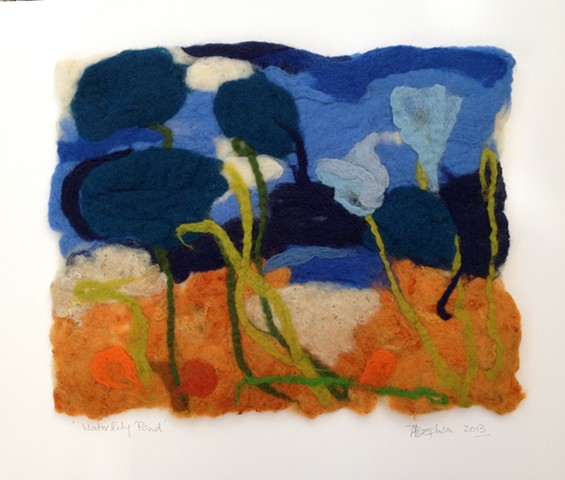 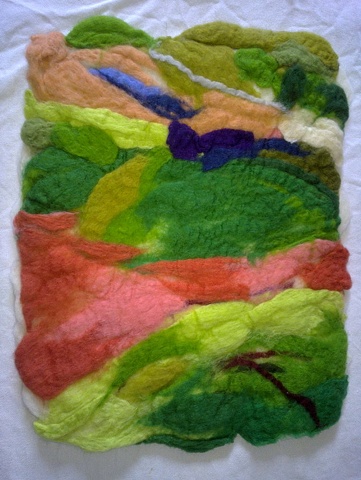 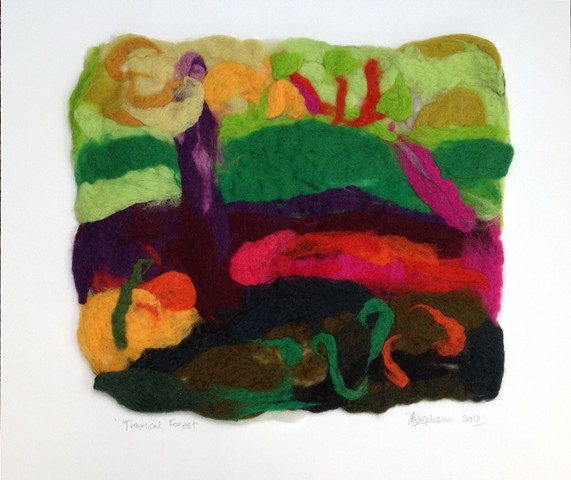 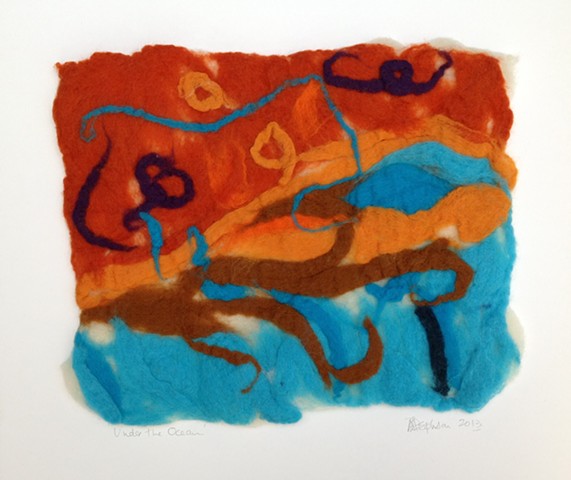 Under the Ocean
Wool Painting 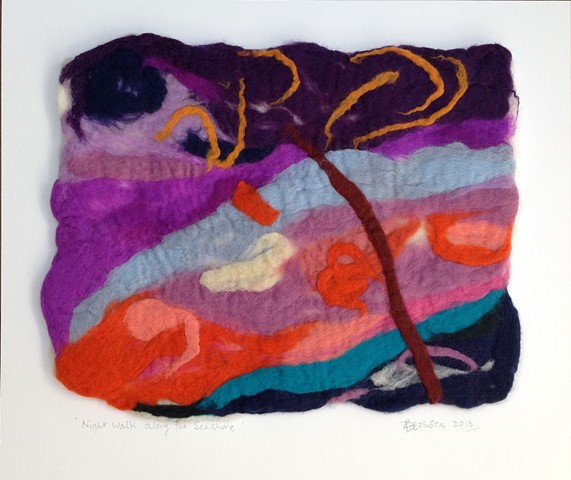 Night Walk along the Sea Shore 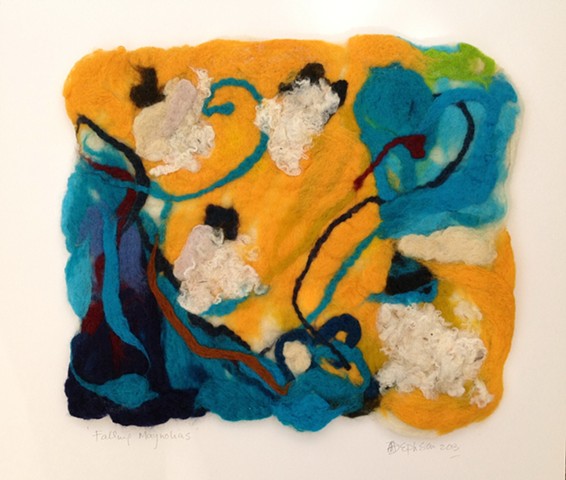